“There were three shots outside, a second’s gap between each. Crack. Then silence. Then crack, silence, crack. Like knocking. Like the devil announcing his presence at the gates of hell.”

The figure in the hoodie was leaning in, whispering so the ten or so kids in uniform gathered round had to bend their heads forward to catch the words, leaning a little closer with every whispered “crack”.

“Then smack. The sound of exploding glass, and she brushed the empty door frame aside with the barrel of her gun. Reloaded without slowing. Strode down the corridor, turning in one movement to enter a classroom. Crack. A silence. For a second, then two, that’s all but it felt like minutes before screams were everywhere, then crack. Reload, march from the classroom, down the corridor, picking another, sweeping in in one movement, and by now you could barely hear the gunshots over the growing screams, and still she didn’t stop, just kept on marching and reloading, and swooping into classrooms, shooting, leaving, marching, shooting, reloading, selecting, shooting, until she was at the end of the school and the whole building was aflame with screaming, and at the last door of the last class she kicked the wood in as she strode and reached a hand in her pocket, brought out a box of cartridges, stopped, framed in the doorway like a shadow backlit by a sobbing, shouting blaze of fear. Crack. No silence, no delay, crack, reload, crack, crack, reload, until every last pupil was dead and the teacher trailed a slick of their blood to the floor where they’d cowered till the last bullet. And she walked, slow, through the dead, pushing all of them with the end of her gun to make sure they didn’t move, and when she got to the wall, and she was certain every one of them was dead, she threw the rifle to the floor, took a handgun from her pocket, placed it to her temple, and screamed, so loud it carried over the roar the whole length of the school, screamed just one word, squeezed the trigger, and everything was silent.”

There was a moment when the small crowd was totally still, totally quiet, like they were sizing each other up to see who’d move first.

Then they all drew breath together, and one of the kids said, “No way.”

“Yeah, why do you think they pulled down the school and built this place, dumbass?” said a third.

“Yeah, but not like that,” said the first. “Not like some hero, some avenging angel. What does this freak know?”

“Why would someone do that?” said another.

All of a sudden there were ten kids crowded around, jostling, pointing, talking over each other, all saying the same thing, like someone messing with a sample: “What do you know?”

The figure took two steps back and turned their head to one side.

The figure stepped back again, lowered their head, lifted their hood, gripped a handful of long, raven black hair, and lifted it up.

Revealing the side of her head.

Revealing the scar in her temple.

He didn’t hear me scramble down the bank. He had his back to me and his headphones on, listening to old music no doubt. “Velvet Underground isn’t old music,” he told me once, “it’s modern music written a long time ago.” Whatever. To me it just seemed to be about drugs and self-harm, and I hated it, hated him listening to it as his body fell to pieces around him.

In the five minutes it took him to tag the crumbling wall, I finished two cigarettes and started a third. I walked up behind him when he’d finished, lifted one of his headphones and waited for him to turn round.

“Want one?” I asked, handing him a cigarette.

“Kayla!” A smile filled his face and his eyes lit up with the reflection of the cherry bud at the end of his cigarette as he drew, then smiled again, and threw his arms around me. I could feel bone beneath his hoodie and tried not to flinch. There was so little left of the boy I’d known when we met, three years earlier, a pair of thirteen year-olds hitting puberty and a new school together.

Kayla Flame, the skinny girl who kept her hood up and sat at the back and said nothing; Jack Hunt, the fat guy who always had his ears in 60s music and his nose in a book from the same time. We sank fast through whatever kind of messed-up social hierarchy existed at Black Lane High till within weeks we were scrabbling around at the bottom, on our own except for the toecaps.

We made a simple pact. One night we were crouched against a corrugated iron wall, the light from our cigarettes jerking from adrenalin and nerves and tears. He said “Whatever else, we keep each other alive, yeah?”

“So do I,” I said, and I don’t know why but I grabbed my lighter, sparked it, held it between us, and reached for his hand. He didn’t resist as I held it open and moved his palm over the flame. He didn’t flinch and I pushed him away and held the lighter so close to my own hand the skin crackled and hissed.

We pressed our hands together and suddenly the pain was like someone peeling me with a knife and salting me like a side of bacon. I screamed and snatched my hand back, shaking it violently to cool it in the air.

When I looked at him he hadn’t moved. He smiled, and there was a single tear in one eye, and he said, “Safe, yeah?”

“Safe,” I said, staring at him, waiting for a sign he was hurting. But there wasn’t one. And he was still. Like the fear had drained away and he’d gone the weirdest sort of calm.

He took a can from his bag, and sprayed the iron wall with the outline of a flame.

How much had changed since then, I thought as I felt his ribs cut into me. I was still skinny but I must have weighed half as much again as he did. But I could still feel the tension in his body loosen just a bit as he leaned into me. Somehow we’d kept each other alive this far.

It was around ten when we headed back. It was spring and cloudy and in the orange light pollution we could see plenty well enough to walk on the towpath that skirted some of the swanky new riverside developments. We walked slowly, staring to the side, looking in at the lit rooms full of expensive furniture and paintings and all kinds of fancy gadgets. And absolutely no life or soul. It was like being at the zoo watching all those so-called normal people going about their so-called normal existences. They might as well have been animals their lives had so little to do with ours.

“What do you think they dream about?” I asked Spark.

“It’s more than sad. They might as well be dead. The moment you stand still you stop living.”

The one thing Spark and I never did was stand still and stop dreaming. It may have looked to the outside world like we spent our lives hanging around smoking and doing nothing but in our minds we had a hundred lives planned out, each of them different, each of them exciting, each of them just waiting for us to take the first step. Though for some reason we’d never taken that step.

I was thinking about one of those futures as we walked that night. I don’t know which one. One where Spark was happy, where there was food and no heroin and no pain. But that could have been any one of them.

I turned to look at him. He didn’t like me looking, he was too self-conscious because of all the weight he’d lost, and I tried not to. I guess I wanted to see if I could remember how he used to look when his long blonde hair was shiny and his eyes still had a fire in them, and put that old, happy Spark into my dream.

And over his shoulder I saw them. No more than ten feet away. Five of them. Kids from our year. Each one of them must have weighed as much as the two of us together.

Spark’s eyes registered something was wrong with me but it was too late. Before I could move they broke into a run. I grabbed Spark’s arm, but he didn’t get what I was doing. “Run, dammit!” I shouted at him but he just looked at me.

Suddenly his eyes were huge, his mouth opened in surprise, and he crumpled to the floor and Tyler Cross was standing there, looking me right in the eye and laughing. His friends just stood there while he laughed, and then he started kicking Spark, again and again and Spark didn’t move and didn’t make a sound.

I wanted to shout at him to get away, wanted to cradle Spark, to tell him it was all OK, but it was like a curtain came down in my head. All of a sudden I couldn’t think at all. I ran atTyler, charging him like an animal.

His friends started laughing too, and I flailed my arms into his sides, but the blows had no strength. I feltTyler’s body convulse, but it wasn’t pain. He was laughing at my efforts. I wanted to break his head clean off his shoulders to make him shut up, but I could feel his arms tightening around me.

Then I felt the first of the blows come down on my back. A second, on my neck. Boots jabbing at my legs. I threw my arms wildly to fend them off but there were too many of them.

“Spark!” I shouted. “Spark!” I kept shouting but it was coming out quieter and quieter each time. I was losing strength in my arms. My body was screaming from the steady rain of fists and feet.

And then there was nothing.

I tried to open my eyes but my head felt like it would split in two.

One by one bits of me started throbbing until my whole body was wrapped in pain.

I fought the searing heat across my forehead, and slowly managed to force my eyelids open.

He smiled, that gentle, soothing smile I knew so well, and then I saw his eyes, the tell-tale pinpoint pupils he got when he’d shot up. And it hit me harder than any of the other blows had done. 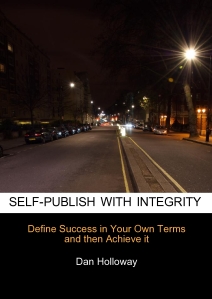 now available for Kindle in the UK for £1.88 and in the US for $2.99 as well as in all other Amazon territories

Songs from the Other Side of the Wall

This is my blog